Automation with Ansible II: Ansible Tower (DO409) is designed for IT professionals who use Ansible by Red Hat® and need to centrally manage their Ansible projects in a way that scales to large teams and complex enterprise installations using Ansible Tower by Red Hat. 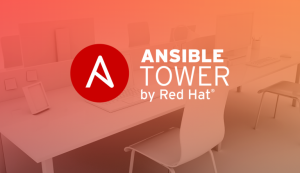 This Ansible training is based on Ansible Tower 3, Ansible 2, and Red Hat Enterprise Linux® 7.

This course will teach students how to deploy and use Ansible Tower by Red Hat to manage their existing Ansible projects, playbooks, and roles, perform basic maintenance and administration of the Ansible Tower installation, and configure users and teams and use them to control access to systems, projects, and other resources through role-based access controls. Students will also learn to use the visual dashboard to centrally launch, control, and monitor Ansible jobs, use the Ansible Tower application programming interface (API) to launch jobs from existing templates, and automatically schedule Ansible jobs and update the host inventory.

Audience for this course

Prerequisites for this course

Outline for this cource

Introduce and review the course.

Install Ansible Tower by Red Hat and describe its architecture

Explain what Ansible Tower is and demonstrate a basic ability to navigate and use its web user interface.

Create and manage inventories and credentials

Create inventories of machines to manage and set up credentials that will allow Ansible Tower to run jobs on those systems.

Use additional features of job templates to improve workflows by creating simple job launch forms, templates to launch multiple jobs in sequence, and to report job success or failure through external notification systems.

Use advanced techniques to work with inventories, including dynamic generation of inventories from centralized information sources and monitoring of hosts in an inventory for configuration deviations or differences.

Maintenance and administration of Ansible Tower

Perform routine maintenance and administration on Ansible Tower and get a basic familiarity with the command line tools and Ansible Tower API.

Demonstrate skills learned in this course by using a provided specification to configure and operate a new organization in Ansible Tower with certain users and teams, an inventory of hosts to manage, and an Ansible project containing playbooks and other supporting files.

This table shows all the upcoming batches for the month of December 2020.

For Applicable exam fees Ansible Certifications, feel free to call on 8956930893 / or You can also fill up this enquiry form with your information and we will get back to you.

For More Updates on training world see us on http://www.facebook.com/focustrainingservices